Una Mullally: target of a million electric vehicles on our roads lacks cop-on 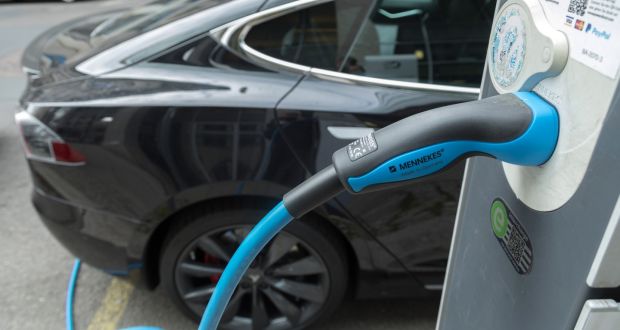 If you already own a car, then why not modify it, instead of chucking it and buying a new one? Photograph: Alexander Becher/EPA

Every time I hear the line that the Government has a target of a million electric vehicles on Irish roads by 2030, I think: stupid idea. Not because we don’t need to get rid of petrol and diesel vehicles – that bit is obvious – but because the implication is this target means new vehicles, and a million of them. What we actually need to be aiming for is fewer private vehicles, and addressing our addiction to consumerism overall. There are better ways to achieve the electrification of vehicles than creating a boom for the car manufacturing industry – which obviously uses an incredible amount of energy and materials in making these vehicles – and essentially throwing away vehicles that are perfectly decent besides what they run on and how they run.

Green capitalism is an oxymoron. Green consumerism is too. Growing the new car market is not a logical approach. We need to use what we have. It’s ridiculous that out of one side of its mouth, the Green Party bangs on about recycling, reusing and upcycling, and out of the other, essentially instructs people to buy new cars.

We could do a deep psychological dive on how colonialism and historical peasantry makes mugs of us all in the shops, but time is running out

One of the greatest Irish attributes is cop-on. Common sense needs to form the backbone of a radical approach to the climate crisis here. Rooting innovations in cop-on would be lauded by those members of the public who don’t make up the vested interests that have a grip on government climate policy. More forestry, a sustainable approach to electric vehicles, a high-speed electric rail network expanded across the country, prioritising city roads for tram use, ending the cruel export industry of live animals, introducing cheaper and more heavily subsidised public transport, affordable insulation solutions for homes and publicly owned wind power (not the current bonkers trend of tech companies buying up wind farms and claiming this is somehow a logical avenue to reach renewable “targets” and not what it actually is – the creation of additional energy in order to divert it towards energy-guzzling data centres), are what’s needed. Encouraging consumerism runs counter to the concept of sustainability.

Irish people love new things, even if we still feel slightly guilty about the consumer boom of the Celtic Tiger. One of our national pastimes is ripping out perfectly good kitchens and replacing them with a slick, bling aesthetic more at home in Miami than Monasterevin. We could do a deep psychological dive on how colonialism and historical peasantry makes mugs of us all in the shops, but time is running out. If we want to be nimble, smart and sustainable, then let’s go back to the concept of cop-on.

We don’t need a million new vehicles. Cop on. We need to root everything we do from now on in concepts of sustainability, practicality and not making more new things just so we can throw away the old things. I’m intrigued by New Electric Ireland, a Wicklow company taking learnings from a Dutch company and training mechanics in the craft of electric conversion – removing a car’s engine, gearbox and fuel tank, and replacing that with a new motor and the batteries needed to power it. “Most mechanics we work with can get an engine out of a car in about half an hour,” Kevin Sharpe of New Electric Ireland said in an interview with IrishEVs.com, “and the rest of that process is just bolting in the kit, and you can do that in a couple of hours”. This conversion process costs the owner somewhere in the region of €2,000-€5,000. Makes sense. If you already own a car, then why not modify it, instead of chucking it and buying a new one?

We need to look at things in that favourite cliche of politicians: “in the round”. We need to see things as connected. A car is not magically sustainable by default of being electric. It has to be manufactured, and its sustainability also depends on how the electricity it uses is generated. This is why the lifetime emissions of an EV vary from country to country, because of how each country generates electricity. In a country where electricity is still generated primarily through fossil fuels, it takes much longer for an EV to ultimately emit less carbon dioxide overall than a petrol or diesel vehicle. A country with cleaner and greener electricity generation, on the whole, is better suited to a massive surge in EVs.

We also need a reality check when it comes to the more profound changes that need to occur to actually initiate a new way of living that doesn’t contribute further to destroying the planet. I hate to break it to you, but successive Fine Gael and Fianna Fáil governments have not been able to solve the housing crisis, the health service, childcare, homelessness, water infrastructure and many more fundamental issues that should make up a functioning and equal society. How on Earth could anyone believe that on the issue of the climate crisis – any contemporary government’s biggest challenge yet – these parties will make a U-turn on their embedded ideologies and somehow ace this challenge?

That’s just not going to happen. Fianna Fáil’s stupid short-termism, Fine Gael’s voracious neoliberalism and the Green Party’s consumer-capitalist strain all run counter to addressing the climate crisis and saving the planet. Unless we unseat those forces, we’re not so much crawling towards climate chaos as joyriding towards it.