new paper from our team: to Beer or not to Beer?

The in vitro antithrombotic properties of ale, lager, and stout beers

The in vitro antithrombotic properties of polar lipid microconstituents of three Irish beers (ale, larger, and stout) have been assessed against platelet-activating factor-induced platelet aggregation. Total lipid (TL) extracts were obtained using the Bligh and Dyer method and each beer was separated into the organic phase and hydromethanolic phase. The total polar lipid (TPL) and total neutral lipid (TNL) fractions of the organic phase and hydromethanolic phase of each beer were obtained using a counter-current distribution. The TL, TNL, and TPL extracts of each phase of each beer were measured for their capacity to inhibit platelet-activating factor-induced platelet aggregation. The low IC50 values obtained suggest that all three beers contain potent polar lipids that can inhibit platelet-activating factor-induced platelet aggregation. The fatty acid composition of the organic phase TPL extracts were measured using gas chromatography-mass spectrometry. The organic phase total polar lipid extracts were further fractionated using thin-layer chromatography (TLC) and the antithrombotic bioactivities of these TLC bands were measured. This data suggested that the TLC bands corresponding to phosphatidylcholine, phosphatidylethanolamine, sphingomyelin, and cardiolipin were the most active phospholipids in the total polar lipids of the organic phase. These promising results indicate that beer consumption may provide antithrombotic effects.
at January 29, 2019 No comments: 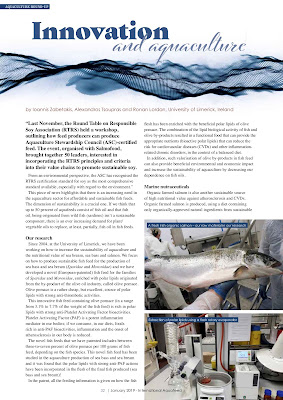 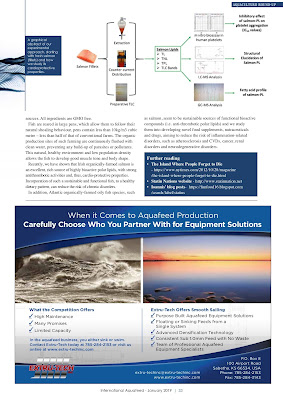 in the Jan issue of International Aquafeeds, we have published an article on Innovation and Aquaculture.

new article from our team

The effect of fermentation on the antithrombotic properties of polar lipids in ovine milk has been assessed through the production of yoghurts. The total lipids (TL), total neutral lipids (TNL), and total polar lipids (TPL) were extracted.

The fatty acid profiles of all yoghurt polar lipids were analysed by GC-MS. The levels of MUFA increased in the fatty acids of the polar lipids, but there was a reduction in PUFA as milk was fermented to yoghurt.

The bioactivity of each lipid extract was assessed against platelet-activating factor (PAF) induced platelet aggregation. All yoghurt polar lipids exhibited potent antithrombotic activities with IC50 values ranging from 45 to 77 µg.

Shotgun metagenomics determined the species-level microbial composition and functional potential of the yoghurts. Yoghurts containing L. acidophilus seem to correlate with greater bioactivity. Several phospholipid biosynthetic genes have been identified in the most antithrombotic yoghurts. This study has demonstrated that fermentation enhances the antithrombotic properties of yoghurt polar lipids against PAF.
at January 25, 2019 No comments:

Obviously, many Greeks in the old days were very productive when they were very old.  For instance, Sophocles wrote Oedipus at Colonus when he was about 90 years old.  Of course, this is only anecdotal evidence.  He could have been very exceptional.  Unfortunately, we do not have longevity data or data about elderly people's mental and physical function from ancient Greece.

It occurred to me that there were some unusual events in ancient Greece which indicate that people were used to the concept of people living very long and productive lives.  My lecture had about 4 examples:

1.  Sophocles.  When he was about 80, the Athenians elected him to be part of a committee of 10 or so to govern the city and perhaps revise the constitution during the Peloponnesian War, which Athens was losing at the time.  We do not elect octogenarians to positions of power in a crisis unless we figure that their age is not relevant.

2. Agesilaus, King of Sparta.  When he was 80, he was hired by a rebel pharaoh in Egypt to fight against the Persians.  When he arrived in Egypt, the Pharaoh changed his mind because Agesilaus limped, wore dirty clothes and was rude.  However, other candidates for Pharaoh competed to hire him.  Obviously, you don't fight to elect an 80-year-old general to lead you in a war where death by torture is the penalty for losing unless you don't think his age matters.
Also, Spartan kings were expected to lead from the front, wielding their swords, not just strategize in a tent.

3.  Timoleon of Corinth.  The Syracusans engaged him when he was 70 years of age to fight against the Carthaginians and free their land from tyranny.

4.  Isocrates.  The enemies of Demosthenes engaged him when he was 90 to debate Demosthenes on the question of resistance to Macedonia.  He continued traveling around Greece giving speeches until he was 100.
Clearly, their contemporaries did not consider that the age of these individuals was an impediment.  Therefore, they must have been used to people living functional and productive lives well into their 80s or beyond.  What was the secret?

Not genes, the ancient Greeks were too divergent.  Diet is an attractive possibility except that the Spartan diet was terrible: "black soup" made from duck fat and blood and other ingredients.  Worth looking into further, I think.

Exercise was a factor.  The topography of Greece was and is everywhere very rough.  If you look at the elevations of the Acropolis, Areopagus and Agora, you will see that the average Athenian could not go about his daily business without doing a huge amount of exercise.  Lacedaimon was flatter but the Spartans were constantly exercising as part of their military drill.

New paper of our team

Marine and salmon polar lipids (PLs) extracted by conventional extractions with non-food-grade solvents (CE-salmon-PLs) possess antithrombotic bioactivities against platelet-activating factor (PAF) and thrombin. Similar effects of food-grade-extracted (FGE) marine PLs have not yet been reported.
In this study, food-grade solvents were used to extract PLs from Irish organic farmed salmon (Salmo salar) fillets (FGE-salmon-PLs), while their antithrombotic bioactivities were assessed in human platelets induced by platelet aggregation agonists (PAF/thrombin). FGE-salmon-PLs were further separated by thin layer chromatography (TLC) into lipid subclasses, and the antithrombotic bioactivities of each subclass were also assessed.
LC-MS was utilized to elucidate the structure-activity relationships. FGE-salmon-PLs strongly inhibited PAF-induced platelet aggregation, while their relevant anti-thrombin effects were at least three times more potent than the previously reported activities of CE-salmon-PLs. TLC-derived lipid fractions corresponding to phosphatidylcholines (PC) and phosphatidylethanolamines (PE) were the most bioactive lipid subclasses obtained, especially against thrombin. Their LC-MS analysis elucidated that they are diacyl- or alkyl-acyl- PC and PE moieties baring ω3 polyunsaturated fatty acids (PUFA) at their sn-2 position, such as eicosapentaenoic acid (EPA) or docosahexaenoic acid (DHA).
Our results concerning the potent antithrombotic effects of FGE-salmon-PLs against both PAF and thrombin pathways strongly suggest that such food-grade extracts are putative candidates for the development of novel cardioprotective supplements and nutraceuticals.
Keywords: salmon; polar lipids; platelet aggregation; platelet-activating factor (PAF); thrombin; phosphatidylcholine; phosphatidylethanolamine; LC-MS; EPA; DHA; PUFA; phospholipids
at January 18, 2019 No comments:

New paper of our team 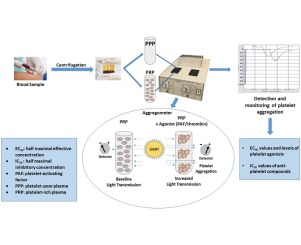 Platelet aggregometry assays are generally used for the analysis of platelet function but can also be adapted for further research and therapy focused applications. This method describes the procedures for the preparation of human platelet-rich plasma (PRP) and platelet-poor plasma (PPP) for the assessment of human platelet aggregation induced by agonists such as platelet-activating factor (PAF), thrombin, collagen, adenosine diphosphate (ADP), arachidonic acid, etc.

•
This method can be applied in vitro to evaluate the aggregatory effects of these agonists and to assess the antiaggregatory effects of several bioactive antiplatelet agents (compounds of natural or pharmacological origin) in human PRP.
•
This versatile method can be used in both basic and clinical research for the assessment of platelet aggregation (a major cardiovascular risk factor), platelet agonists, and inhibitors, in physiological or pathological conditions.
•
This method can be adapted to assess platelet activity in postprandial and intervention studies ex vivo.