Shape up with Greek yogurt as a post-workout snack 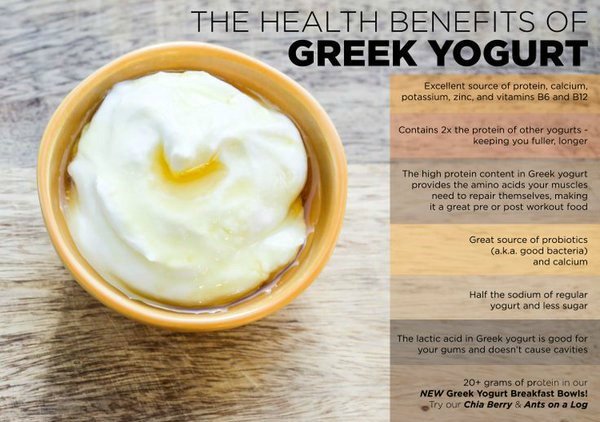 Next time you head for the gym, grab a pot of Greek yogurt as a post-workout snack. You may soon be reaping benefits!

This study suggests that if you’re wanting to build muscles and become body-beautiful, then it helps to do more than just pump weights.
Choosing what to eat after a workout is essential because that’s the time when your muscles are repairing themselves and your energy levels are low. Dairy proteins (mostly casein and whey) are a great source of amino acids for rebuilding muscle.
A combination of drinking milk and resistance exercise increases strength and muscle size and leads to a leaner physique. But what about other dairy products? Can they all contribute to boosting the physical effects of exercise? Greek yogurt – a fermented dairy product – is a promising candidate and makes a convenient and nutrient-rich post-workout snack, say the authors.
Greek yogurt is made by straining regular yogurt to remove more of the whey, and it is packed with protein (mostly casein). A 175 g pot of plain Greek yogurt provides about 17 g of protein. An equivalent amount of protein is found in two glasses of milk. So, Greek yogurt provides lots of protein in a conveniently sized portion, handy especially when you’re on the move.
Like milk, Greek yogurt contains key nutrients such as calcium and phosphorus that are essential for healthy bones. But there are important differences too. Greek yogurt has a thick creamy consistency which may mean you feel fuller for longer.
And as a fermented food, Greek yogurt contains bacteria that may have additional health benefits, help to improve digestion and support immunity, say the authors.

Assessing the effects of Greek yogurt and exercise

In this study, young men who hadn’t been training regularly, entered a combined resistance training/plyometric (jump training) programme for 3 days per week for 12 weeks.
Half of them ate fat-free, plain Greek yogurt (20 g protein/serving) three times on training days – immediately post-exercise, 1 hour post-exercise and before bed. On non-training days, they ate the yogurt twice a day – at breakfast and before bed.
The other half of the young men formed a placebo group and consumed a carbohydrate-based pudding (no protein, but the same amount of energy as Greek yogurt) at these times instead.
Strength, thickness of upper arm (biceps) and thigh (quadriceps) muscles, and body composition were measured before the start of the exercise programme and again after 12 weeks.


Greek yogurt was associated with a healthier body composition

Muscles is denser than fat and so it comes as no surprise that both groups put on weight after 12 weeks on the exercise programme. But when it came to shedding body fat, the men in the Greek yogurt group were once again the winners.
High-protein Greek yogurt has been associated with reduced appetite and energy intake at mealtimes. Added to that, calcium in Greek yogurt may inhibit fat production and stimulate fat breakdown in the body, say the authors.


‘…Greek Yogurt should be considered as a viable post-exercise, whole food, protein source for individuals beginning a resistance training program with the goal of increasing strength and lean mass and decreasing fat mass.’ – Bridge et al, 2019.