Greenouse gases, methane and the ...cows 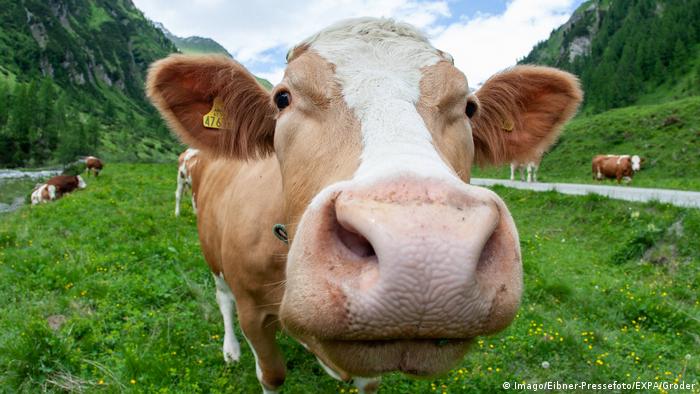 ‘No country has ever set such an ambitious target,” said Green Party leader Eamon Ryan, when describing the short-term goal of halving emissions by the end of this decade at the launch of the Climate Action and Low Carbon Development (Amendment) Bill 2021 last week. The bill’s long-term goal is no less ambitious. By 2050, it wants Ireland to reach net-zero emissions — producing no more CO2 than is removed from the atmosphere through sequestration measures such as planting trees. This is also “a challenge beyond compare”, Ryan said.

Micheál Martin, the taoiseach, argued that the “hardwiring into law” of sectoral emissions targets, which means that the government could be taken to court if it failed to meet them, would fundamentally alter Ireland’s response to the climate crisis by “forcing change”.

The big political sticking point when it comes to reducing emissions in Ireland has been agriculture. It accounts for 35 per cent of emissions, more than any other sector. Farmers have long argued that they are a special case, on the basis that it is harder for them to reduce emissions than it is for other sectors, and that any reduction in beef or dairy production here will simply be displaced to other countries, probably in South America, which may be less environmentally responsible.

Let’s discuss Joseph Poore and Nemecek’s study as it is regularly referenced.

Let’s review some of these issues...

•Animal agriculture unfairly gets corn and soy agricultural GHGs added to their LCAs. Corn and soy are grown for human use first. We’re LUCKY that cows will turn our waste into nutrient dense foods.

•And then, for emissions, the gases lifecycle isn’t taken into account.

Another glaring issue is that the study is based on conventionalagriculture. No mention of regenerative agriculture, holistic planned grazing, or agroforestry.

In the end, “sustainability” will depend on what variable you are optimizing—is it greenhouse gas? Land use? Acidification? Animal welfare? Productivity? They don’t always point in the same direction.

Let’s go over the bullet points in more detail.

Feed:
Cattle feed on 90-100% grass/ alfalfa/ hay. The grain they do consume is by-product after human use (for instance high fructose corn syrup, ethanol, corn meal etc and soy oil). Whole grain can be expensive to feed. They do get whole grains though especially during finishing which is usually grains that were deemed unfit for human consumption. Then there is also silage which is the whole plant all chopped up.

Water Footprint:
First of all not all water is equal.

So really it isn’t about total water but what kind of water.

The water that pastured animals get is almost entirely green water. It falls as rain. It’s not blue water that is pumped to them. All animals can be pastured.

* One main difference among all methods for assessing water use is whether and how they include green and gray water. The “water footprint” approach includes green water, whereas life cycle assessment approaches tend to exclude green water or to include only the variation in green water resulting from changes in land use. A second difference is whether water use is reported as a volume of water or as an index of water-use impact (e.g., H2O equivalents). A third is whether water that returns to the same location (e.g., in urine) is considered to have been consumed.

* Because of these differences and the fact that existing studies have analyzed only a limited number of different livestock production systems, methods give wildly different results for the same livestock product. For example, estimations of water use to produce 1 kg of beef range from 3 to 540 L of H2O or H2O equivalents for the life cycle assessment approach and from 10,000 to 200,000 L of H2O for the water footprint.

GHGs and their lifecycle.

First of all the largest AGRICULTURAL contributor to GHG emissions is PLOWING, not cattle.

"We can't eat our way out of climate change...U.S. beef has one of the lowest carbon footprints in the world, 10 to 50 times lower than some nations. Greenhouse gas emissions (GHG) from cattle only account for 2-3% of U.S. GHG emissions. For comparison, landfills contribute 2.2%; 27% comes from transportation; 27% from electricity; and 40.9% from other sources."

One of the biggest concepts being missed in our push to reduce “emissions” is that cattle are actually part of the carbon cycle, while extracting fossil fuels are introducing NEW greenhouse gasses to the environment.

Methane:
There is an old fake-science idea doing the rounds again at the moment. This is that cows are culprits in the global warming narrative. The problem, however, is that the scary image of cows destroying the planet with their carbon emissions doesn’t fit with how the planet actually works.

At one point of the carbon cycle, it is true that cows emit carbon dioxide (CO2) and methane (CH4) to the atmosphere, each of which contains one atom of carbon. This is a basic fact of biology – but what about some other basic facts to go with it?

It would seem the fact that ruminants emit carbon gases is regarded as the clincher argument by people like Rosemary Stanton and Kris Barnden, who recently published an article on the ABC News website damning cattle. The problem is they fail to put this isolated fact together with others to give it context and, in this way, create a misleading impression. They fail to describe how a cow exists within the carbon cycle. They fail to ask a fundamental question; ‘Is the carbon a cow emits new carbon to the atmosphere?’

The believer/activists don’t explain that when a cow eats a plant it is vicariously ‘eating’ carbon from the atmosphere. They don’t explain that, when that cow exhales carbon dioxide or belches methane, the carbon in those gases goes back to where it ultimately came from – the air around them.

The implications of photosynthesis are not divulged to the public by the cows-are-culprits believer/activists. They don’t explain where animals get their energy from and how their food sources become laden with energy. (Hint: it’s ultimately from the Sun and it involves the carbon cycle, the water cycle and photosynthesis.)

Cows and other animals consume these carbohydrate sugars and ‘burn’ them as energy to run their bodies. As a result of this ‘combustion’ the by-product of carbon dioxide is produced and exhaled to the atmosphere. We humans do the same thing. Once in the atmosphere, the carbon dioxide again becomes available for photosynthesis in plants, and so the cycle starts over again. This is an example of sustainability in plants and animals.

So, with regard to the carbon dioxide the cow breathes out, it goes straight back to where it came from – the atmosphere.

What about the methane?

The methane issue is a kind of blind spot for those who vilify cows because most bovine critics would see themselves as deeply concerned about preserving a natural and organic environment. Well, methane from cattle is a natural and organic gas but the detractors portray it as something else – something unusual, something particularly sinister. Methane production is also solar powered – another appealing feature to those concerned about natural and organic things. Methane inevitably results from the process of plant growth (photosynthesis) and subsequent fermentation by various agencies such as microbes, insects and ruminant animals. Methane occurs naturally and abundantly in rainforests, wetlands, lakes, swamps, rivers and arid zones.

Methane is produced naturally and organically in the environment by microbes, ruminant animals, wild grazing herds and the prodigious activity of insects such as ants and termites.

A cow has a part of its digestive process that we do not have and this enables it to eat tough cellulose food. This fermentation chamber is called a rumen where, with the aid of microbes, the cow processes tough cellulose foods in the absence of oxygen. The by-product of this combustion is methane (CH4) which is then belched.

The methane molecule is oxidized within one decade and brakes down into CO2 and water. – see equation at end. For the period that the methane molecule is in the atmosphere it is a potential global warming gas but its molecular characteristics – its heat absorption capacity – is not well matched to the frequency at which the Earth radiates heat. For this reason the theoretical heat-trapping potential of methane is curtailed when the gas converts to its original form. And, in any case, it is a natural part of the environment that has been happening for hundreds of millions of years by vast herds of ruminant herbivores across the globe.

It seems that the detractors of cattle are reluctant to concede that the emissions of cows are part of a closed and self-completing carbon cycle in the atmosphere. This organic cycle involves all plants and animals, including ourselves.

In conclusion, the carbon gas emissions of cows are just one point in a giant circle that is the atmospheric carbon cycle. If you plot the other points in the cycle, it forms a giant circle which loops back to the start point. There is no new carbon in the atmosphere as a result of a cow’s existence.

Note: The C6H12O6 molecule is a carbohydrate molecule – a food ‘sugar’ which can be eaten by an animal and ‘burnt’ to produce energy. When this molecule is ‘burnt’ it produces carbon dioxide (CO2) as a by-product. This is then exhaled to the atmosphere as the same gas as it was prior to the growth of the plant the cow eventually eats.

The Breakdown of methane.

While this is explained pretty well for the layman, another thing that wasn't mentioned was the role of hydroxyl radicals (OH compounds) that also act to oxidize methane. Hydroxyl radical comes from when oxygen reacts to UV light and frees up an oxygen atom; that oxygen atom binds with a hydrogen atom that came from water vapour creating the OH radical, which binds to CH4 to oxidize it, rendering it unstable. These hydroxyls often come from the water vapour put off by transpiration of plants. And of course, the greater the green cover there is (the greater number of green photosynthetic solar panels there are), the more water vapour and oxygen is given off, the greater the efficacy of these natural atmospheric compounds have to oxidize methane.